The HG Sports Turf affiliation with the MCG stretches back to 1998. Since this time HG Sports Turf has become the official turf supply partner of the MCG. In 2014 the hallowed turf was due for a scheduled replacement and HG Sports Turf were once again appointed to complete the works using their patented product Eclipse Stabilised Turf. 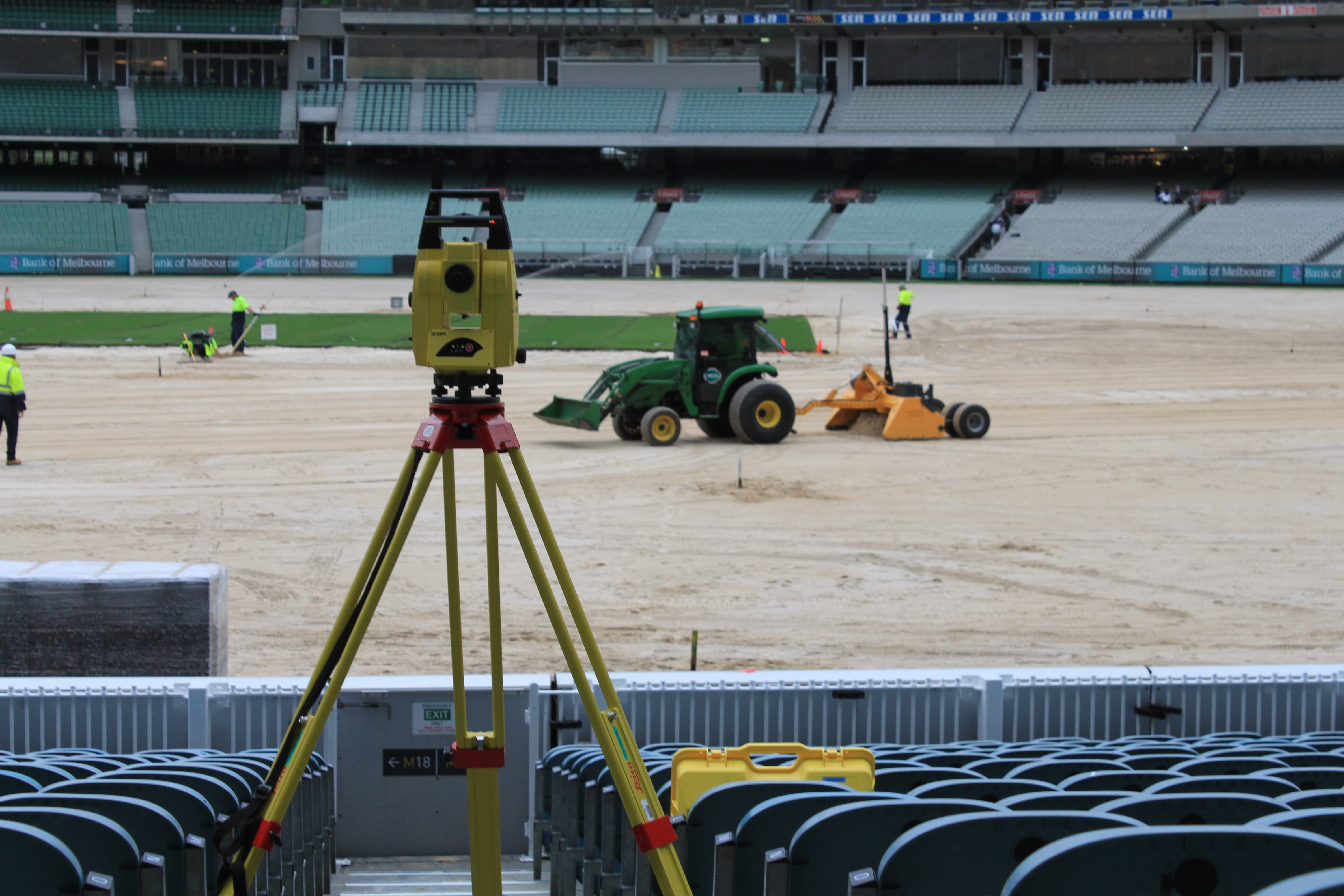 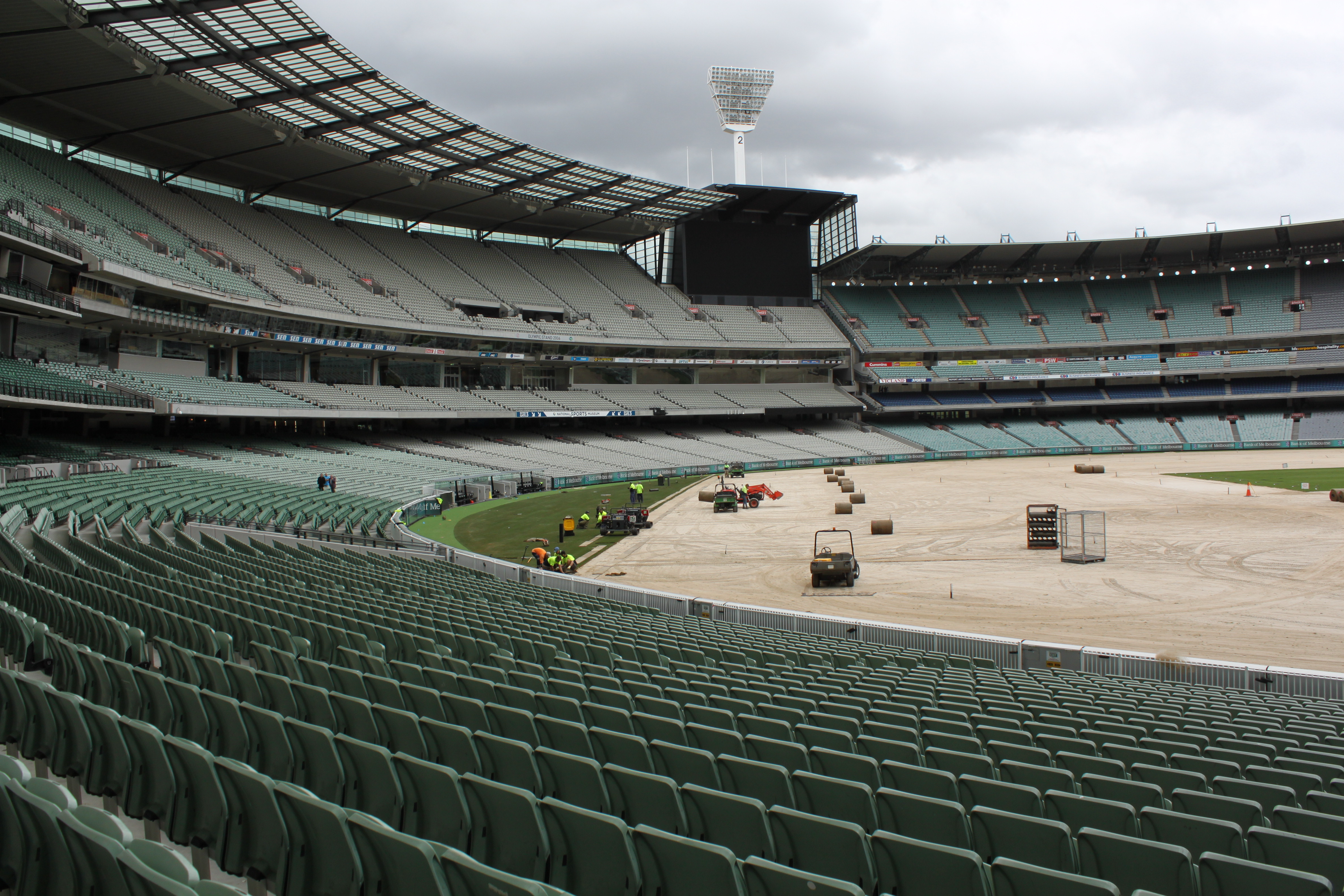 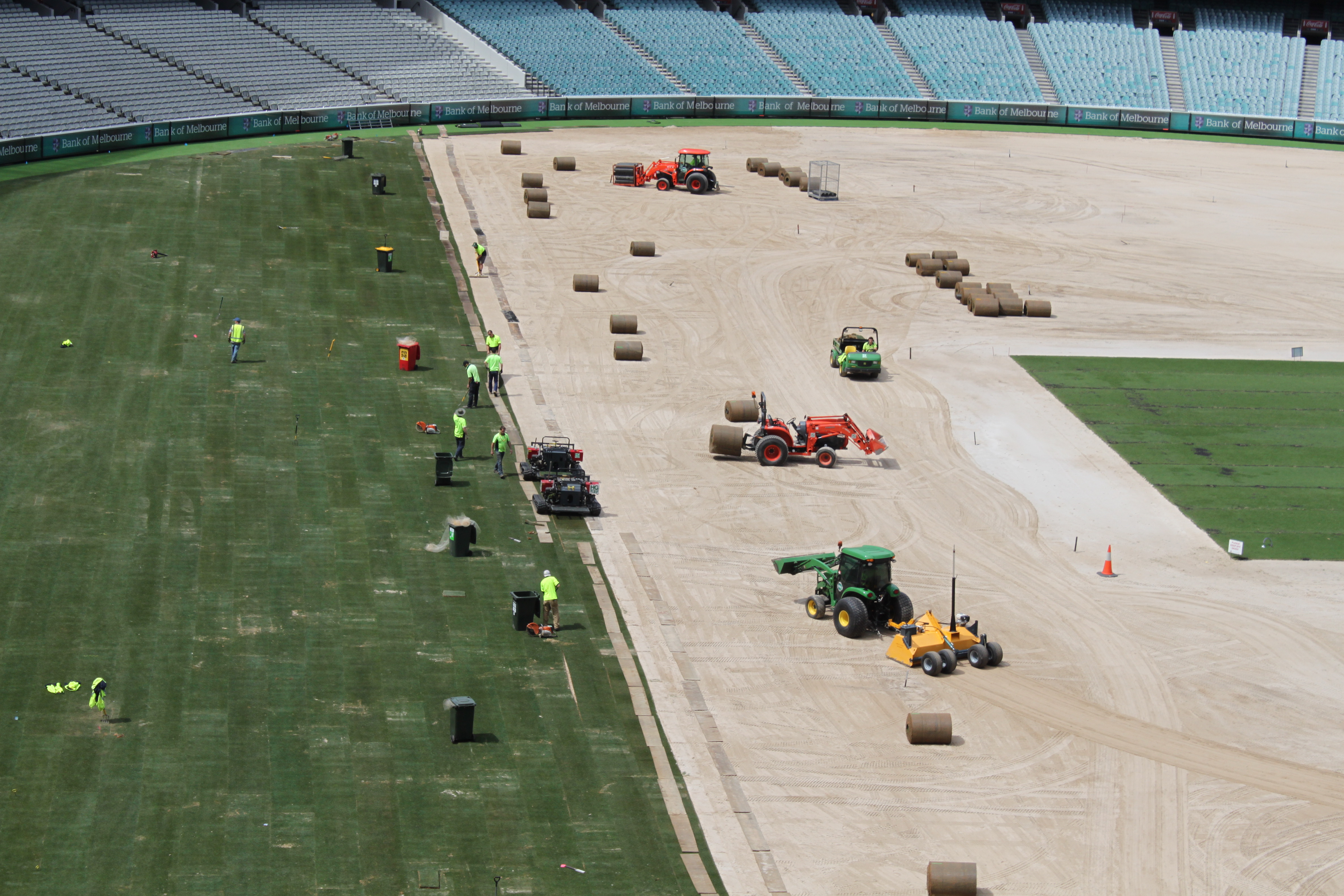 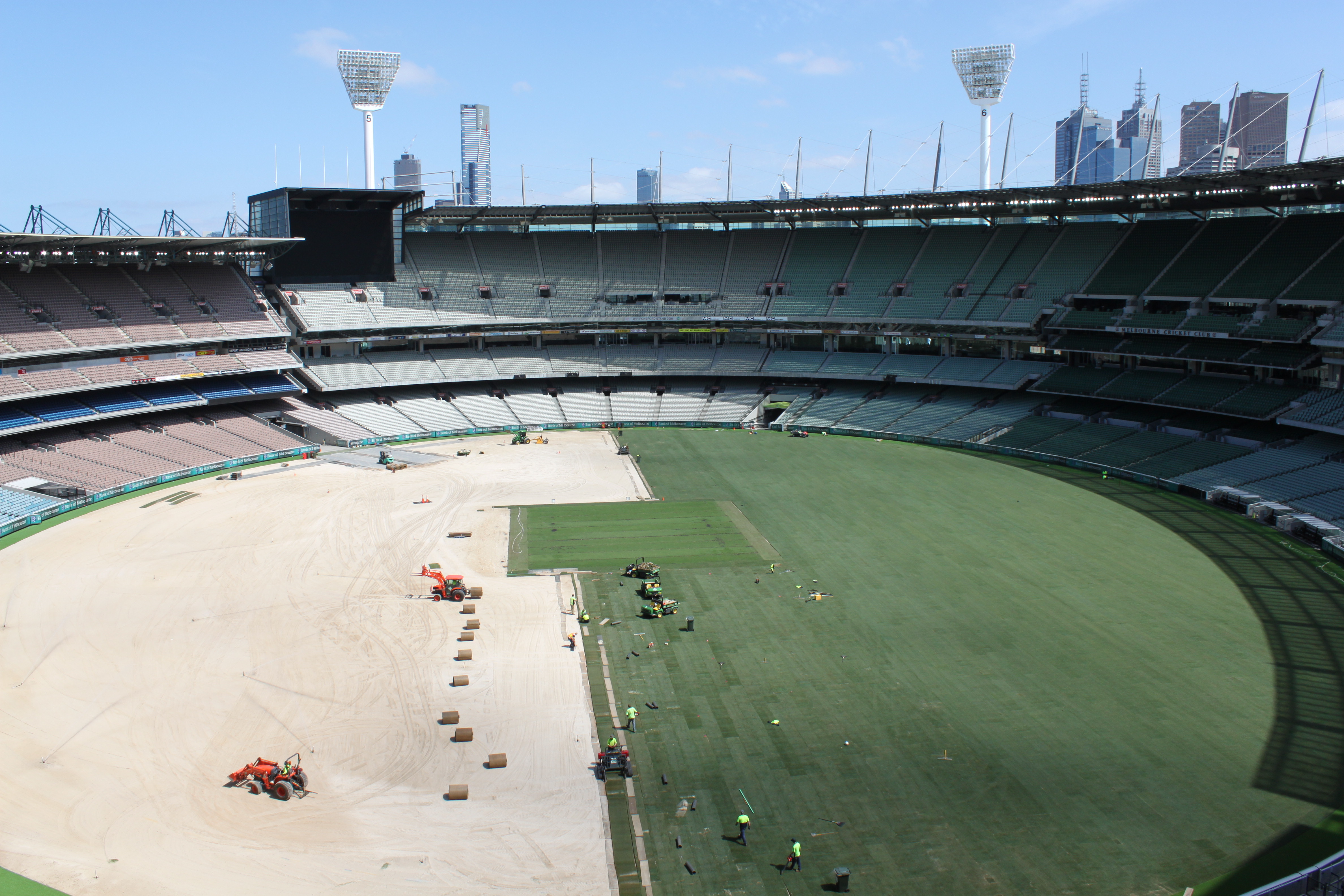 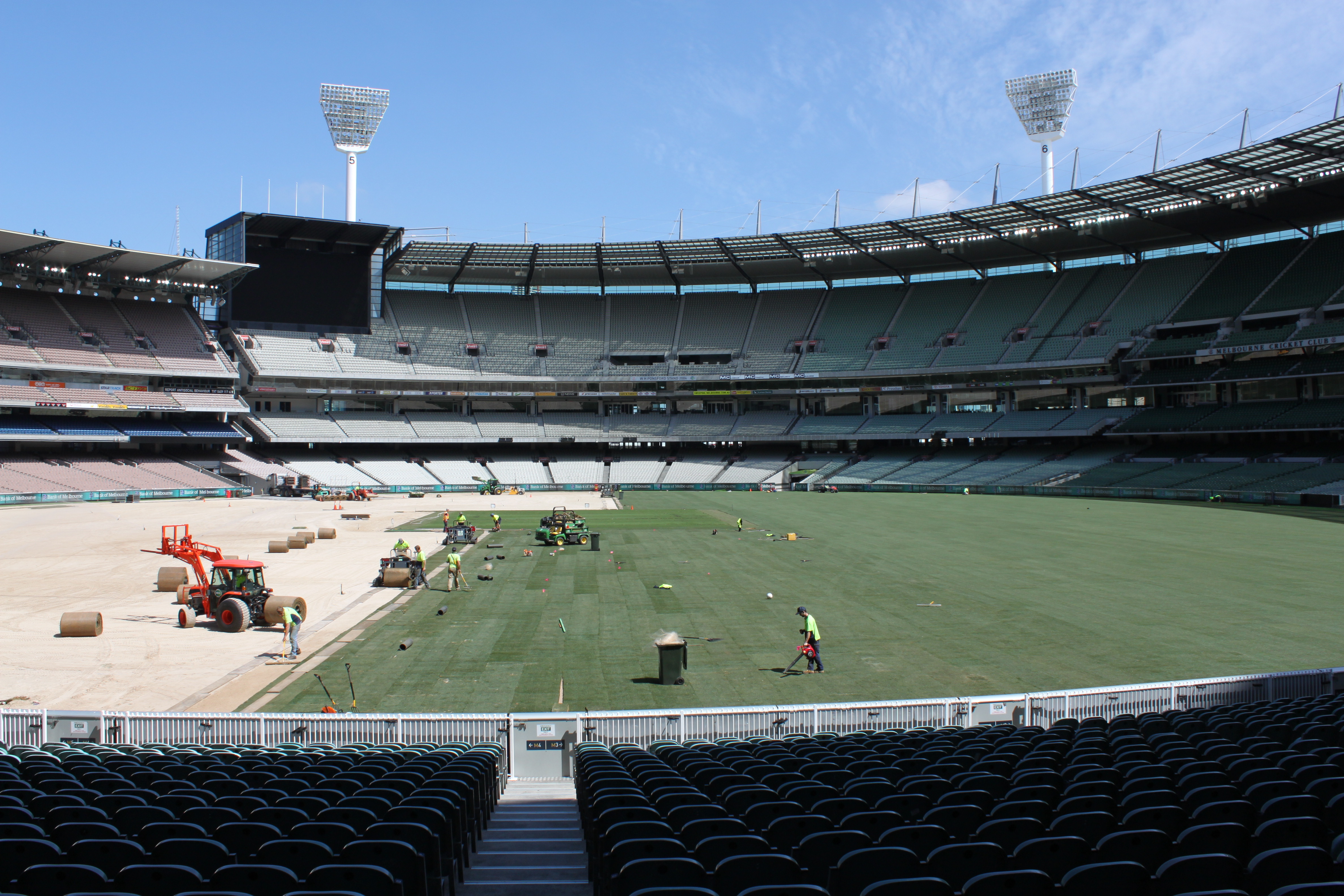 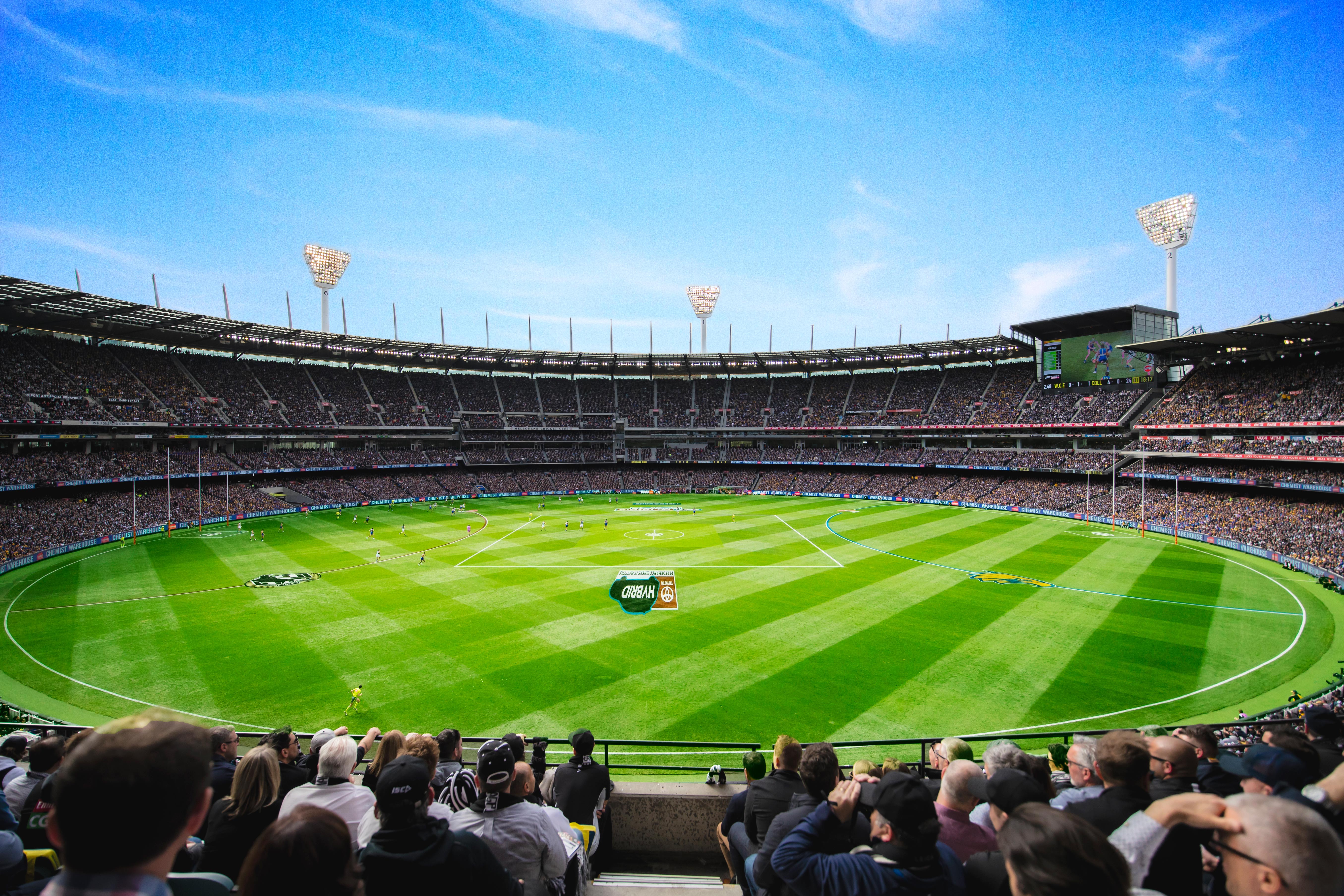 Got questions? We are here to help! Get in touch with one of our turf experts today

Following 12 months of planning and immediately following the 2014 AFL Season a full scale rehabilitation of the playing surface was planned.

The scope of works included the removal of approx. 2,500Cu of material from the entire ground to clean material, the importation of approx. 200Cu of sand, laser grading using Total Station 3D control, excavation, construction of a new sub-base, installation of a 3m wide AFL/CA approved perimeter boundary ring road and the supply and install of Eclipse Stabilised Turf.

The first main challenge we had was in the months prior to the works and this was in establishing known datum points in the stadium. Not convinced of the accuracy of the points we were given, we completed a full survey to ensure we could use 5 fixed points to triangulate our design.

The scope was relatively straight forward to remove the existing Eclipse surface to the backing of the stabiliser and expose clean sand. Core samples were taken in multiple locations to establish the depth of the backing in order to develop a cut/fill model.

Due to the strategic replacements on the field since the previous rebuild the Eclipse backing was at many varying depths and this proved challenging to estimate the exact quantity for removal. Following the removal of approx. 2500Cu of debris we conducted a surface to surface model and found we needed to import approx. 200Cu of sand to achieve the design grades.

Another major challenge was to regarding the traffic management relating to the project. The MCG is a fully operational site 365 days a year and our site entrance was off the very busy Brunton Avenue. With over 100 truck movements to remove and replace material and 60 truck movements of turf we had to ensure we had a safe work site.

HG Sports Turf was once again chosen to install their patented Eclipse Stabilised Turf System a partnership with the MCG that has developed since 1999.

Eclipse Stabilised Turf is the product of years of product evolution.  Formerly Motz TSII, many years of product development and innovation has seen the introduction of an agronomic enhanced product to the market.

With its open weave primary backing and a patented removable backing which removes the unwanted organic material from the underside of the turf, Eclipse Stabilised Turf has improved its already commanding position as a market leader in the stadium turf market.

The ultimate benefit of the system is its ability to perform to international sports standards immediately after installation.

Eclipse Stabilised Turf has evolved over the years to meet the market demand and the exacting tolerances of major venues throughout Australia, New Zealand and Asia.

The Eclipse Stabilised Turf installation works were completed on time and within budget and ready for the One Day International cricket match just 5 days after completion.

Our staff are experts in the turf industry and are ready to discuss your requirements for your next project with you.

"XtraGrass has transformed the playability at Trevor Barker Beach Oval. The goal square is safe and not scuffing out. It requires little maintenance and blends nicely into the surrounding Santa Ana Couch"